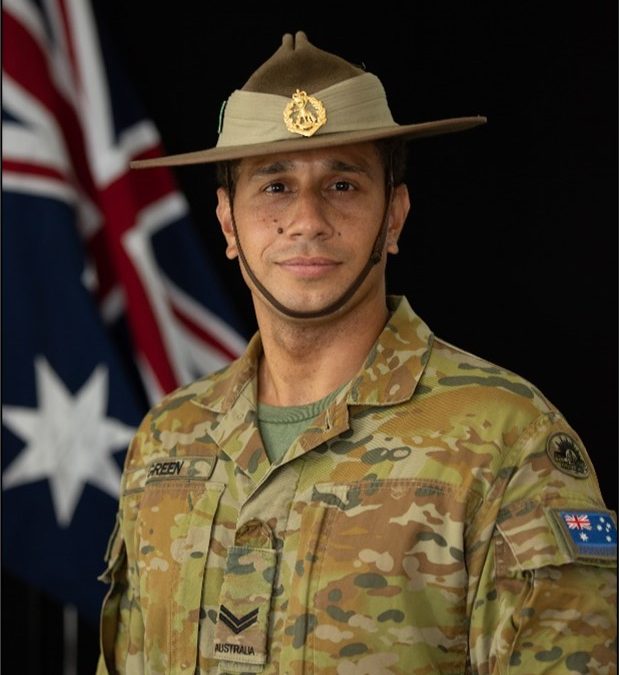 The finalists for the Hassett Award for the best junior leader in the Regiment for 2022 are:

The winner of the Hassett Award for 2022 was announced at the Annual Infantry Dinner 24 November 2022.

All eight nominees were invited to Canberra to experience a parachute jump and tour of various places close to the Regiment including the Australian War Memorial to experience a significant part of the Regiment’s history first hand. This cross pollination opportunity will help to strengthen the current Regiment and provide an opportunity for finalists to get to know other junior leaders. The RAR Foundation looks forward to providing more leadership opportunities to the Hassett Finalists in the future.

Corporal Joshua Green is an outstanding junior leader, worthy of consideration for the 2022 Hassett Award for Leadership. The 3rd Battalion, The Royal Australian Regiment (3 RAR) nominate him for his superior performance.

Corporal Green is an outstanding role-model. He faultlessly upholds the highest standards of professionalism and dedication to duty and is widely respected by all ranks. He takes great pride in his role as a junior leader within The Royal Australian Regiment and consistently enhances its reputation, and that of the Australian Army. His strong professionalism as a rifle section commander extends beyond strong tactical acumen and battle-cunning, but also genuine empathy and compassion for his soldiers.

Corporal Green posted to 3 RAR as a section commander in A Company. He is a qualified reconnaissance patrol commander and sniper team leader, and he is also an M113AS4 crew commander and instructor. He recently arrived following a posting to the Land 400 project trials in Puckapunyal, where his knowledge and experience directly contributed to building the armoured infantry future capability. Notwithstanding his qualifications and experience, Corporal Green is a humble and dedicated infantry section commander committed to training his soldiers on all aspects of infantry skills.

In 2022, Corporal Green faultlessly showcased exceptional tactical ability. Initially, he pursued the opportunity to instruct on the 3 RAR Individual Crew Commanders Course, where he displayed deep knowledge, experience, and proficiency in M113AS4 Armoured Personnel Carrier operations and tactics. Corporal Green subsequently acted as a Platoon Sergeant on the battlegroup warfighter exercise. His knowledge and experience helped shape how the three mechanised platoons operated when integrating with a tank squadron and during the conduct of a battlegroup obstacle breach under fire.

His discipline, initiative, and battle cunning in the field distinguished him from his peers and effectively enabled his chain of command to capitalise on the mechanised capability. Further, Corporal Green’s expert knowledge and qualifications in the areas of both reconnaissance and snipers allowed him to advise soldiers on dismounted tactics and to greatly improve the overall soldiering ability of his platoon and the company.

In early June, Corporal Green was hand-selected to deploy at short-notice to Poland, leading a team of drivers and vehicle mechanics to train Ukrainian soldiers on driving and commanding M113AS4 Armoured Personnel Carriers. With limited information about his upcoming task, he seamlessly liaised with a newly formed ADF team in Europe to enable his team’s understanding of the Polish training area, the course administrative requirements, and the safety framework for the driving and live fire components.

Through ADF operations in a new operating environment, Corporal Green’s leadership and initiative was tested. Logistics challenges and the pressing need to upskill Ukrainian soldiers demanded by the front line to fight, placed unique demands not experienced through recent ADF operations outside of Special Forces. Corporal Green led his team to re-design the training program, delivering a two day theory lesson package followed by a three day practical activity, culminating in a live fire practice in conjunction with Polish Armed Forces to hundreds of Ukrainian soldiers across more than a month. The training Corporal Green’s team provided to the Ukrainian crews directly contributed to the Ukrainian war effort.

Corporal Green remained in Europe throughout July to ensure arriving equipment was secure and prepared for immediate participation in combat. Corporal Green was tasked and trusted to support the arrival of armoured personnel carriers from other contributing nations, which required him to travel to multiple European nations to supervise loading, inspection and onward movement. Corporal Green also set the foundation for the subsequent ADF Bushmaster protected mobility vehicle training, providing follow-on forces with a ready environment to make their contributions. Returning to Australia in early August, Corporal Green had supported the nation’s initial training commitment to Ukraine. Corporal Green’s leadership, technical and professional mastery over the period 10 June – 09 August 2022 contributing to the whole of government efforts supporting Ukraine was exemplary.

Upon returning to Australia, Corporal Green resumed his position as a section commander in the Ready Combat Team, preparing for contingency operations as part of Army’s highest readiness general purpose force. He continued to set the standard for readiness with his personal preparation and leadership of his section. Furthermore, he used his own initiative to develop lessons-learned from his experience in Poland as a baseline for training and preparation for the battalion.

Corporal Green’s performance in 2022 in training and on operations has been characterised by his dedication to duty, leadership, professionalism, technical and tactical mastery. Corporal Green’s conduct is of the highest order, and is worthy of the Royal Australian Regiment’s consideration and recognition.