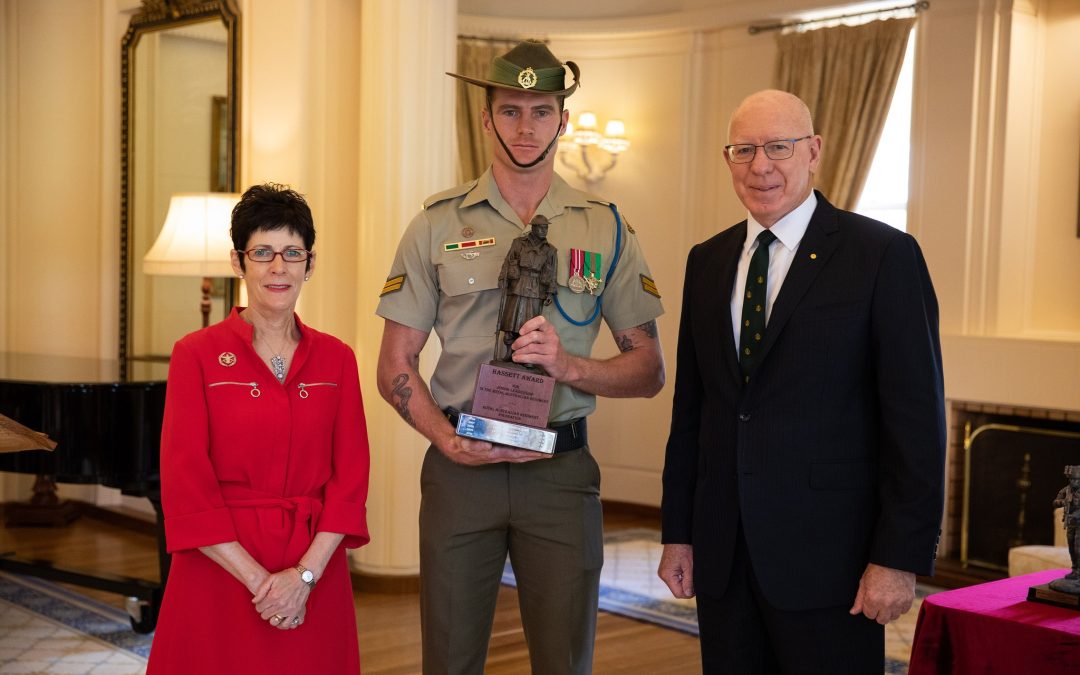 The nominees for the Hassett Award for the best junior leader in the Regiment for 2021 were:

The winner of the Hassett Award for 2021 is Corporal Matthew Reid from the 1st Battalion.

All eight nominees have been invited on a tour of Vietnam in September to share their leadership experiences with each other whilst examining a significant part of the Regiment’s history first hand. This cross pollination of ideas will help to strengthen the current Regiment and provide an opportunity for sponsors to also join this elite group of junior leaders.

CPL Reid was nominated for the Hassett trophy for his consistently superior performance as a junior leader within the 1st Battalion, The Royal Australian Regiment.

CPL Reid is posted to the 1st Battalion as a Section Commander within Bravo COY. During 2021, CPL Reid distinguished himself as a consummate professional, trusted leader and mentor. He ably supported his chain of command through his conduct, timely advice and actions in both the barracks and field training environment.

CPL Reid participated in all major 1 RAR exercises in 2021, these included 1 RAR shake out, Seppi Stride live fire packages, CTC led Warfighter exercise, Talisman Sabre and a deployment on OP Accordion/Highroad during the recent Non-Combatant Evacuation Operations of Australian citizens, approved visa holders and approved foreign nationals in Afghanistan 2021. In addition to these high tempo operations, CPL Reid was selected by 1 RAR to be the section commander of the DOG Cup team; his selection was based on his exceptional soldier and leadership skills and faultless performance on the Unit barrier test.

CPL Reid consistently demonstrates performance above that expected of his experience and position. He has routinely demonstrated exceptional leadership qualities and remained steadfast in his commitment to duty. His initiative is outstanding and he can be relied upon to understand and execute his commander’s intent with little to no supervision. He has been at the forefront of innovation; utilising drones, PMV’s and his recon skills against a free thinking enemy throughout the Warfigther exercise. His Infantry expertise and leadership was evident by the success of his section and platoon throughout the highly demanding, dynamic and rewarding Warfighter serials.

CPL Reid’s superior Infantry skills and physical fitness have been on display all year, leading from the front during the 1 RAR DOG Cup barrier tests, beating all before him. CPL Reid took ownership of the 20 man team, pushing them through a rigorous six week training regime preparing for competition. Throughout this training he also managed the readiness for future Ready Combat Team and follow on force requirements, this became essential during the mounting of the 1 RAR Task Group.

Corporal Reid is an excellent young leader, his attributes were thoroughly demonstrated whilst deployed on OP ACCORDION/HIGHROAD as a Junior Commander of the 1st Battalion, The Royal Australian Regiment - Ready Combat Team from 18 August 2021 – 11 Sep 2021.

CPL Reid went above and beyond to identify, secure and safely escort multiple families and vulnerable individuals to the Australian preliminary screening area. In an extremely uncertain and dangerous environment he performed multiple rescues, often isolated from other Australian forces requiring a high degree of physical courage and initiative. His actions assisted the RCT in enabling over 4000 evacuees safe passage to the Australian Main Operating Base in the Middle East.

CPL Reid demonstrated physical and moral courage as he worked along the front line to identify and extract designated persons, often at physical risk to himself. This was at a time of extreme tension and confusion, the entrances were overcrowded by thousands of desperate people intermixed with Coalition Forces already emotionally and physically fatigued from the days of operation undertaken.

On return to the Australian Main Operating Base in the Middle East, CPL Reid again demonstrated excellence, he set the standard of respect and service to others above self, ensuring the efficient and well-organised transition to Australia phase of the operation for the evacuees.

CPL Reids’s superior performance in 2021 over the full suite of Infantry operations, from NEO to warfighting can be characterised by selfless service, teamwork, leadership, physical and morale courage to do the right thing and an outstanding devotion to duty.