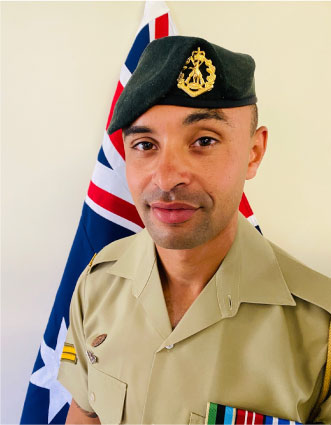 The nominees for the Hassett Award for the best junior leader in the Regiment for 2020 were:

The winner of the Hassett Award for 2020 is Corporal Gealan Toullea from the 6th Battalion.

All eight nominees will proceed on a tour of Vietnam when it is safe to do so to share their leadership experiences with each other whilst examining a significant part of the Regiment’s history first hand. This cross pollination of ideas will help to strengthen the current Regiment and provide an opportunity for sponsors to also join this elite group of junior leaders.

Extracts from the Commanding Officer’s citation for Corporal Toullea include the following:

Corporal Gealan Toullea is the 6th Battalion, Royal Australian Regiment nominee for exceptional junior leadership and devotion to duty. He has displayed outstanding leadership, commitment to service, excellent interpersonal skills, and a high standard of professionalism while deployed on Force Protection Element 11 in 2019 and as the acting Company Mechanised Sergeant for Support Company in 2020.

Corporal Toullea was deployed on Operation HIGHROAD as the Second-in-Command of the Protected Mobility Vehicle Section during the period 19th February to 5th September 2019. Given his excellent performance and capacity for work, he was identified and appointed as a Section Commander very early in the deployment. In his first year as a Lance Corporal, his section supported over 150 Guardian Angel tasks for the Australian Afghanistan Task Force contingent. He consistently displayed superior leadership and judgement expected of a leader more senior in rank. Corporal Toullea’s leadership throughout the deployment was of an exceptional standard. He effectively employs superior emotional intelligence and very strong interpersonal skills to build teams and reinforce the combat mindset among his soldiers. He rapidly assimilates information and remained highly adaptive to the dynamic operating environment of Kabul throughout the deployment period.

Corporal Toullea readily accepts additional responsibility, often tasks typically delegated to a more senior Non Commissioned Officer. His capacity for work and knowledge of mission specific tactics techniques and procedures enabled him to assist in the conduct of force protection risk assessments for multiple train, advise, assist locations inside and outside of the Kabul Based Cluster in Afghanistan. This significantly influenced decision making the Afghanistan Task Group commanders at all levels. He was responsible for the refinement of the Protected Mobility Vehicle Section SOPs and TTPs documents, ensuring common understanding for elements while deployed, and supporting the force preparation for future rotations.

Corporal Toullea continues to demonstrate exceptional leadership, continuously volunteering to support planning events, training exercises and domestic operational tasks. His performance as a Vehicle Instructor on multiple M113AS4 Armoured Personnel Carrier Driver courses in 2019 and 2020 is to an excellent standard. The Mechanised Warrant Officer has mentioned his instruction is of a level normally considered a product of the experience and knowledge of a commander well above his worn rank. Corporal Toullea has shown unwavering leadership through two M113 Drivers Courses and the first exported M113 Individual Crew Commanders Course this year. His instruction is above his worn rank up to the standard expected of a Mechanised Sergeant, particularly noting his experience as a first year Corporal. His superior level of distinction resulted in the qualifying of around 50 new qualified M113 Drivers and 24 new Crew Commanders for the Battalion. He displayed excellent instructional technique, enabling high comprehension of the teaching material to all soldiers he taught, evidenced by their performance on summative assessments

A task usually allocated to Mechanised Sergeants, his efforts have directly contributed to an increase in standard of Mechanised vehicle crews in the 6th Battalion and other 7th Combat Brigade Units.

Additionally, Corporal Toullea’s leadership and calm demeanour was demonstrated in March 2020, when he arrived on scene to an Armoured Personnel Carrier roll-over incident during the 6th Battalion, Royal Australian Regiment M113AS4 Drivers Course. Corporal Toullea acted without concern for his own safety to rescue his critically injured colleagues. As an immediate responder he immediately moved to dig the Crew Commander out from under the vehicle and coordinate provision of first aid and CASEVAC. His actions were instrumental to the successful extraction and casualty evacuation of the member, without doubt contributing to preservation of life. Corporal Toullea continually demonstrates the ability to act and perform under significant pressure, lead his peers and subordinates to achieve a positive outcome from a dire situation.

Corporal Toullea consistently demonstrates exemplary leadership and devotion to duty. His ability to operate in a calm, collected manner is captivating to all ranks and has played a significant role both on operations and in raising the mechanised capability of the Battalion. His understanding of higher commander’s intent and his ability to rapidly assimilate information ensures consistently high performance of his team. His leadership is of the highest order and in keeping with the finest traditions of the Royal Australian Regiment and the Australian Army.