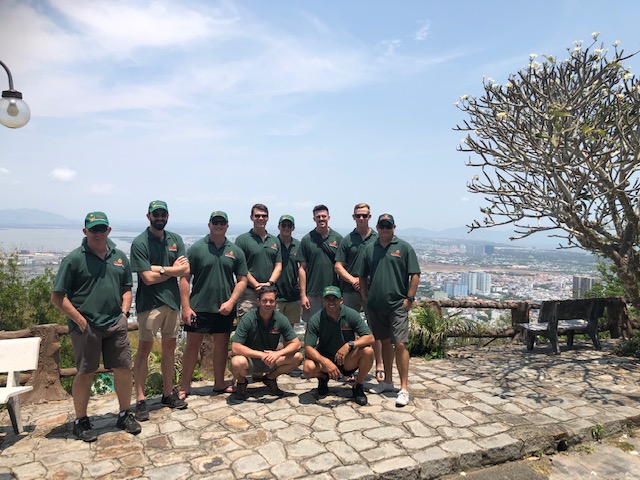 Firstly, a very big thank you to Cpl Justin Evans 7 RAR, participant on the 2017 Battlefield tour, for his insight into improvements for our Battlefield tour. This year’s tour included a day in Canberra visiting the AWM plus an afternoon presentation on the Coral and Balmoral battles by Ray Curtis & Tony Jensen, (visits to these sites were included in the tour) and extra time in the Vung Tau region.

This year there was young leader from one of our
sponsors, Nextgen, join the battlefield tour. The board is keen for industry sponsors
to participate in the tour and to extend the collaboration and leadership
exchange with industry partners.

The Foundation's battlefield tour to Vietnam
for Hassett Award nominees commenced with a morning at the Australian War
Memorial in Canberra. Chris Appleton provided an excellent guided tour of the
AWM. Highlights were the painting of Sir Frank Hassett, the Vietnam display area
and some of the tour members adding their name to the Tarin Kwot wall.

James Cunial – NextGen “most
of the young men signed the Tarin Kwot wall, a special honour reserved for
those that have served in Afghanistan. I later came to understand that some of
these young gentlemen had seen significant action including one of the tours
accompanying senior rankers who had been wounded on three separate occasions.”

In the afternoon the Battlefield tour
participants were addressed by Ray Curtis and Tony Jensen who provided an
insight into their deployments in Vietnam. Their detailed discussion on the
Battle of Coral and Balmoral left a long and lasting impression on our junior
leaders.

CPL Kurt Holzl – 8/9 RAR now 1 RTB “actually
being able to receive a presentation from the MLO who was on the ground at the
Battle of Coral and hearing about his experiences and the little finer points
of the battle was something can’t find doing any sort of research.”

WO1 David Trill – RSM 5BDE and Foundation board
member and WO2 Wayne Swan SOI now Williamtown lead to party to Vietnam.

LT Henry Swindon – 3 RAR “we
learnt a lot from Dave Trill and Wayne Swan. They are both experienced Warrant
Officers and they acted as good role models for the NCOs and excellent mentors
for the Officers.”

After a late evening check-in, the group
adjourned to dinner (as they did as a group every night), and there were clear
signs of bonding commencing then.  There was very little, if any, unit
rivalry; more so, inter-unit respect and a keen yearning to learn about other
units.

A great opportunity for them to collaborate.

CPL Liam Kiernan – 2 RAR “common
themes were the complexities of emerging capabilities, the use of UAS,
capabilities and sighting of modern OS, use of coms and modern C2 and the
transition in amphibious and motorised/mechanised battalions and the increasing
speed of warfare”

Visited
the Presidential Palace, and looked at the ‘War Rooms’ in the below ground
floors, which have been kept intact.  This part of the tour at this stage
was vital, provide the historical context of the entire war as it gained an
insight into the entire war from the ambush of the French at Dien Bien Phu
through to the crashing through of the North Vietnamese Army Tanks at the
Palace.  Next was the tour of the Notre Dame Cathedral, Post Office, and
related the building where the last of the US Helos extracted from in 1975.
From there we progressed to the Remnants of War Museum – again this was a must
at this stage of the trip – which gain great insights into the entire war, some
of which was quite confronting with respect to the medical issues faced by
locals, and the effects of Agent Orange and Napalm.  There was also a good
insight into the PoW compound and treatment, as well as any array of tanks,
arty pieces and other remnants.

Visited the Vung Tau area, in particular: The
Peter Badcoe Club area, the Viet Cong Memorial, the Old ALSG at Vung Tau, RADAR
Hill via cable car which gave a good perspective of the area.

Touredthe
VC tunnel system at Long Phuoc, Nui Dat, and the Horseshoe. Climbed SAS Hill
where the first group presented on the layout of the TF and located positions
on an old map.  The presented spoke about the murder of LT Convery by one
of his own soldiers, and went into detail about the leadership aspects that
might/might not have contributed to the murder; this conversation went for
about 20 minutes and developed into one that talked about the culture then, and
the culture now, why it has changed, and their part in future change – really
good.  A short memorial service at the old memorial.

LT Nick Pullinen – 5 RAR “the
most powerful moment for the trip was the ceremony at the RAR Memorial outside
the extremities of the Nui Dat area. Built to commemorate the ultimate
sacrifice by 300 of our forebearers. After a brief, moving ceremony, the group
walked back to the bus across the field. Unlike other experiences we would
endure together over the week, the entire group was silent. Perhaps
unconsciously, as a group, everyone slowly merged into single file. At that
point, I feel as if the connection we, the current RAR had with the past, was surreal. I also feel that at this
point, the group came together like never before.”

Then moved onto Long Tan. This was the moving
part of the trip.  The guide led the service then all of the attendees reflected
on the Battle personally. Junior leaders at Long Tan, representing the
best of the RAR. A great summary delivered by LT Zach Hucker and CPL Adam
Seaman of how the Battle unfolded, followed by personal reflection.

Another great day exploring the AO Bondi where
FSPB Balmoral and Coral were. Travelled to Balmoral, picking up a Vietnamese
Army Colonel, COL. Viet, and Vietnam Veteran, Brian Cleaver.  Brian
Cleaver, a 3RAR veteran of Balmoral gave a great outline of his history, and
the Balmoral Battle.  This was very good as he pointed out the front line
of pits for D Coy 3 RAR, and where the shells fell, and the craters which were
still clear and obvious from the bombardment just to the front of the
FLOT.

Progressed to FSB Coral, which was not nearly as
obvious as the Balmoral area. There were two memorials, a local on and a Viet
Cong one, where we again had a short service to recognise those who fell from
both sides, then progressed to try to see signs of where the Arty Guns and
Mortars were laid out.  CPL Liam Kiernan and CPL Kurt Holzl did some great
work pacing out, mapping, and improving the sketch map provided to us by Tony
Jensen, and I was impressed by the discussion about the layout and positions
that occurred when each of the leaders provided their thoughts on where the
locations actually were.  It was clear to me at this time that the group
had reached the ‘performing stage’, having progressed through forming,
storming, norming in terms of group/team dynamics.

After we departed FSPB Coral, we went to the Cu
Chi tunnels.

This day was really a cultural awareness visit
to the Mekong Delta.  The day was a good insight into the non-Saigon life
of Vietnamese nationals and the group continued to reflect on the Battlefields
they toured over the previous two days.

David Trill – it is always of vital importance
to understand other cultures and their history - and surprise a few of these
blokes with the people and the landscape.

The Foundation’s aim of the trip was to allow for
‘cross-pollination’ between units of the Regiment and industry. This was
certainly achieved.

SGT Carlos Barrera – SOI now 2 RAR “the purpose of the trip was to cross-pollinate the leadership
experiences and qualities amongst the best Junior Leaders in the Regiment. The
Battlefield Tour provided an excellent platform to do this as we were able to
reflect on the experiences of past soldiers and then critically analyse them
both from a hindsight perspective.”

CPL Adam Seaman – 1 RAR “I have come away from this tour with a great understanding of the
Regiments’ history in Vietnam and has increased my knowledge in being a leader.”

James Cunial – NextGen “also
happily surprised to see how worldly the next generation of leaders are on
topics such as diversity, ambitions, family and mateship.”